After speaking at an economic forum, Idrissov and his delegation will view the future site of Kazakhstan’s embassy in Mexico City. The two countries agreed early this year to open diplomatic missions in their respective capitals.

Thursday afternoon, Idrissov will deliver a speech at the Mexican Foreign Secretariat on the theme of “Kazakhstan in the modern world.”

He will then meet with Mexican counterpart Jose Antonio Meade and the two men are to hold a joint press conference ahead of a dinner in Idrissov’s honor.

The Kazakh official plans to meet Friday with Mexican lawmakers.

His schedule for Saturday includes a closed-door session with Mexican business leaders before he leaves for New York, where he will represent Kazakhstan at the opening of the U.N. General Assembly.

Larry Page wants a Google 2.0 that will build... 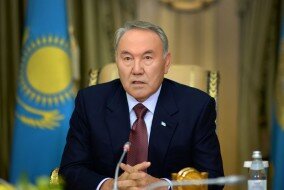 Kazakhstan urges DPRK to give up nukes

José Manuel Barroso and Nurusltan Nazarbayev had a phone conversation