An Italian reporter and his interpreter have reportedly been shot dead and a French photographer has been wounded near the city of Slavyansk, in eastern Ukraine, as their car came under mortar fire.

The injured French journalist, William Roguelon, has been taken to a local hospital where he received treatment and managed to leave the facility on his own. He described how out of nowhere their vehicle was bombarded with mortar shells.

“Before that we heard Kalashnikov shots,” Roguelon was quoted by the Italian tgcom24. “Then the mortar shells rained down all around,” he said claiming to have heard up 60 explosions as they tried to hide in the “middle of a ditch.”

The man, who works as a freelance photographer, has told Russian media that after the shooting he saw his Italian colleagues lying on the ground not moving, Rossiya 24 channel reported.

“In the village of Andreyevka, not far from Slavyansk, an Italian journalist and his interpreter have been shot dead and a French correspondent wounded. Their car came under fire,” a source from the self-defense forces has told Ria Novosti.

The Italian journalist has been identified as Andrea Rocchelli, while the interpreter is believed to be Russian national Andrey Mironov, who was holding an Italian passport. The Italian Foreign Ministry has not yet confirmed the identities, saying it was still in the process of verifying the information on the incident, according to repubblica.it.

According to Roguelon the mortar fire was coming from the side of Ukrainian forces.

The area around the city of Slavyansk has been gripped by violence on Saturday, a day before the scheduled presidential election. Shooting was reported in the village of Semyonovka, where a psychiatric hospital has been partly ruined in a fight between Kiev troops and self-defense forces. Witnesses said a shell hit the roof of the hospital.

According to reports, shooting, artillery and machinegun fire have been heard in the outskirts of Semyonovka starting Friday night. Shell-holes can be seen in the ground all around the village. Smoke was reportedly seen billowing from at least three locations in Slavyansk on Saturday.

The ongoing crackdown on reporters working in Ukraine was condemned by a number of rights groups, including the New York based Committee to Protect Journalists that called on Kiev authorities to “stop equating conflict reporting with terrorism.” The OSCE recently stated that journalists in Ukraine are “continually been denied access to events and information, often by force” and warned that consequences will be “too grave to even imagine.”

As the country prepares to hold early presidential elections, a range of Russian news journalists from different outlets, including RT’s Spanish and Arabic news crews, accredited to cover the upcoming vote, were denied entry to the country without explanation.

The 5 Most Expensive Houses For Sale In Atyrau

Expanding agreements and cooperations with Iran 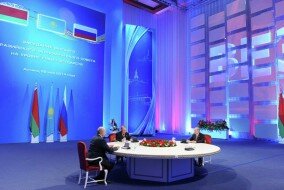